When Runners World conducted an online survey of male and female runners, it revealed that 47% of female runners who answered had experienced some form of harassment when running; for those in the under 30 age bracket, this number rose to 58%. Perhaps worse still, 28% of women said they wouldn't run outside at all for fear of being harassed. This is juxtaposed against just 4% of men who've experienced some form of harassment and although that doesn't detract from the seriousness of this kind of behaviour towards either gender, it does highlight the inequality in the way women are treated on urban streets in relation to men.

Anecdotally, since beginning our #RunnersShoutBack campaign as part of #16DaysOfAction, we’ve heard that female runners have been spat at by a group of teenage boys, been circled by men on mopeds, received sexually aggressive comments such as “You’ve a fat arse but I’d still shag ya”, alongside simply having to put up with consistent interruptions on their runs from men who’ve decided to honk their horn or comment on her body!

This is quite frankly unacceptable behaviour. After all, if we remove this behaviour from the street and place it in the workplace, we’d be shouting ‘sexual harassment’ at the top of our lungs! Instead, we stay quiet about it. Why? Because in some way we’ve been conditioned to feel guilty about it, that it’s our fault. When women have told me about their experience of harassment it’s almost always accompanied by a reason why she wouldn’t have expected it to happen; perhaps she was with her boyfriend, or she wasn’t even wearing particularly revealing clothes, or it was in the middle of the day in a busy area. It’s like we feel the need to explain how it wasn’t our fault yet this should be obvious. Only it’s not because restricting women’s access to equal rights, equal access to public space, even equal pay has long been a feature of our culture and half the time we don’t even notice it’s there.

Our campaign #RunnersShoutBack is about raising the profile of this kind of behaviour because when a community is aware of something, its more likely to create change. The fact is that you may never have experienced any form of harassment when you’ve been exercising. You may never have felt unsafe in the streets. You may never have thought twice about it. But many others have and many of those are women.

Changing the culture is important for more reasons than 'just' enabling women to engage in outdoors activities without fear – you can read more about why here – and that’s what we mean about shouting back; we need to make noise! 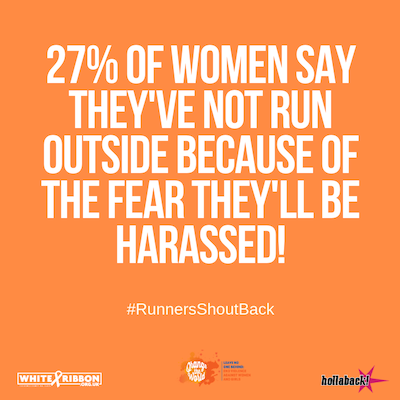 How to ‘Shout Back’

Let’s be honest, if you’re feeling intimidated you’re very unlikely to actually turn around and shout at the people doing that intimidation, and neither should you. Never say anything unless you feel in a safe position to do so; saying that, some women have started telling guys that their behaviour is upsetting and have experienced some surprising results. If you would like to know more about how you can speak up to someone who harasses you, this advice from Hollaback! Is great!

Let’s assume that you can’t say anything in the moment though, how else can we ‘shout back’ and take steps towards changing this culture?

1. Be an active bystander

Sometimes it’s possible as a bystander to say something. Perhaps the person is your friend, perhaps you’re in the pub with them, perhaps you’re just in a situation where you know it’s safe and you feel confident in calling them out for their behaviour on her behalf.

Alternatively, if it’s safe to do so, go over and help – either by distracing the offender with something else (maybe asking the time or directions) or by being direct and calling out the behaviour. Even just a knowing glance or a sympathetic smile to the victim can change the impact the harassment will have in the long term. 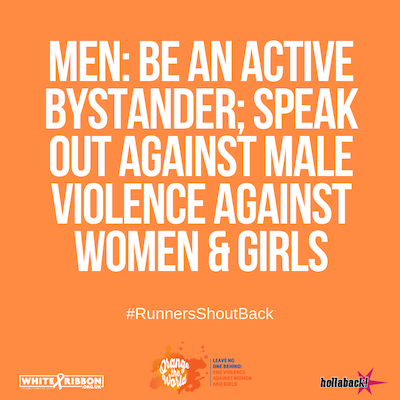 2. Talk about it with your mates

Men, this is aimed at you really. So many of you told us how you like to greet walkers, runners and cyclists with a “Good morning”, “Well done” or other words of encouragement. Keep doing this, it’s lovely! And, in addition, help those who need it to see that there’s a huge difference between “Looking strong” and “Great arse”!

This is one for all of us. We need to make more noise on this because history has shown time and time again that when enough people stand up and tell their story, change happens. Whilst we stay silent and keep these experiences to ourselves, not only do we feel alone and isolated by them but we also don’t open the conversation for others, who aren’t directly affected, to understand.

Plus, in sharing your story, you’ll help others who right now do feel alone; you can lessen the trauma someone else feels simply by letting them know they’re not alone in their experience. And, you know what, you’ll also feel pretty empowered yourself. 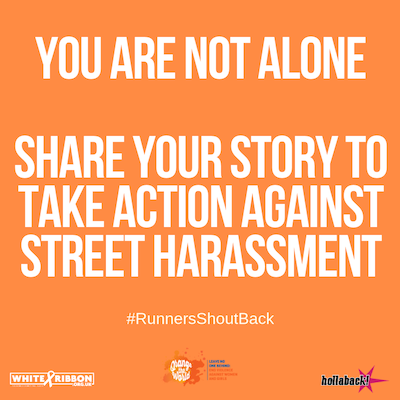 Have you experienced street harassment? Does the thought of it put you off from exercising outside? Have you taken any steps to ‘shout back’ at this kind of behaviour and how has it made you feel?

Join in the conversation and tell us more on Facebook, Instagram and Twitter #RunnersShoutBack. Together, we have the ability to make the streets a safer place for everyone.

You can also add your voice to our survey here.

You Can’t say Anything These Days!

"Don't knock yourself out love!"